Delaney at three years, one month

"Cheeseburgers, cheeseburgers, everywhere I go."  That's a song Delaney made up.  I don't understand the significance of cheeseburgers for her, since we only have cheeseburgers once a month, if that; and she barely touches hers.  But it's such a happy little song, I can't help but smile every time I hear it.

What else has Delaney been up to?  She's finally started to pedal her tricycle around, and I try to encourage her in it because those leg muscles of hers have a way to go.  If there's even a little incline up, she needs a push.  And to think, that tricycle was a second birthday present! 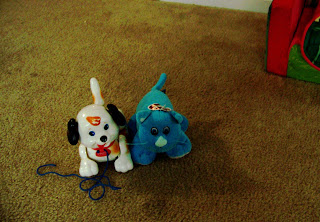 I love this picture Delaney took.  She actually took about six of those, one after another.  Maybe she liked being the one to say, "Sit there and let me take your picture," for once?  Or maybe these little friends just made her happy.  Once, when she saw her tricycle and "princess mobile" next to each other, angled toward each other a little bit, she said, "Look, they're talking."  Tim and I love seeing Delaney's perspective in her pictures.  Some parent's give their kids crayons and markers; we give her the family camera!  Here's another photo courtesy of Delaney.  It's his new Facebook profile pic. 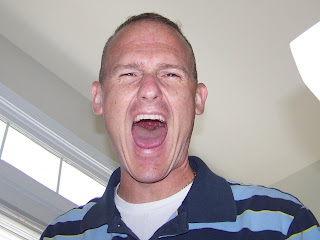 Funny caption, anyone?
She is starting to whine.  A lot.  I thought she was a whiner before, but I really had no idea.  Is this payback for me being a whiny kid?  I have to try really hard not to unravel when I hear that sound.  I can tell it tries Tim's patience too, even though he claims to have endless patience.  (I will give him that he has way more than I do.)  We make her repeat her request in a "big girl voice" and use the magic word.
As much as I get frustrated when she's whiny and rude, I try to praise her when she remembers her manners or does something helpful.  She is such a good girl when she's not driving me up a wall.  The best!  I guess she's a normal three-year-old.  As my sister Anna says, "Terrible Twos, Tiresome Threes."  Can't wait to see what she says about four!  I am still saying three is easier than two.  I know we're only a month into it, but at least now we can communicate about things in full sentences instead of me feeling like a monkey trainer.  And there is no more poop on the windows!  It just occurred to me that if these kids weren't occasionally wretched, there's no way we could ever put them on a bus and send them to school when it was time.  In fact, there's no way we'd ever let them go if they were nothing but lovable.  We'd keep them inside all day and smother them with kisses and hugs.
[On the subject of the poop story, there was an acquaintance of the family who read my blog soon after that happened, and emailed me that she's "glad my son doesn't exhibit your daughter's naptime behavior."  She has two little sons of her own, and I hope by now she's finally gotten what's coming to her.  "Schwartz is getting his," hee hee.  That's mean of me, I know.  It's OK to have that "glad it's her and not me" feeling, but it's not OK to say it to the mom!]
Delaney is aware of the big changes coming our way, even if she doesn't completely understand.  Sometimes she'll exclaim, "My old house in Virginia!"  Funny, I've been feeling the same way about still being here -- like I'm living in my old house.  Like, why are we still here when we have this nice house in North Carolina waiting for us?  In three days the movers arrive.  I might not be able to update the way I like to, for the next few weeks (sniffle), because life will get a little crazy.  We'll move to North Carolina on the Saturday the 14th, and about a couple weeks later we'll drive to Massachusetts and stay there a few weeks with Tim's sister Karen.  We'll spend a week at Cape Cod.  Finally, we'll get to go to the beach this summer!  I am looking forward to the next chapter of our story, and trying to mentally prepare myself for the stress of transition.
Oh, and one other thing:  As of bath time a couple nights ago, we now know that Delaney wishes to be an only child.  She told me, in a moment of frustration because her sister was getting on her nerves, "I don't want Annie anymore, and I don't want any new babies."  Well, then.
Update:  We had Delaney's three year well visit a couple days later.  She is 35 1/2 inches tall, 25th percentile for her age.  That's an improvement from the 10th percentile last year!  She is 30 pounds, 50th percentile.  Healthy as can be.  The pedi recommends hydrocortisone cream for her excema, which she gets on the back of her knees during hot weather.  It's been flaring up lately.  Hydrocortisone cream is what her pedi from before recommended too, but when I put it on her, she cries and asks for the other ointment (Aquaphor).  The Aquaphor is what I put on several times a day, and it keeps it under control for the most part.  But during a flare-up, the doctors say that hydrocortisone will help a lot.  I tried putting it on her when we got home, but she hated it.  We made her wait about 15 minutes before I put on the Aquaphor.  I sure hope she outgrows this summertime excema soon.  I feel bad for Delaney and her red, itchy skin.  Not to mention our clothes and couch cushions are getting ruined from Aquaphor stains.
Posted by Rachael at 7:48:00 AM