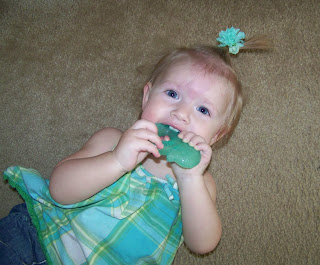 Here I am updating again, even though I said I wouldn't have time.  I actually wrote most of this post a couple weeks ago anyway, and we got Internet the day the movers came, so I'm not missing a beat.  It's been another great month for Annie-Banannie.  She's getting smarter, faster, cuter, and even more squeezable, if that was possible.

She loves going places, and she keeps up so well with Delaney and me.  When I'm going somewhere with the girls, I look for their shoes, and I say and sign "shoes."   She stomps her feet  and does that Butthead-like chuckle as I pick out the shoes.  She plops down on her bum so I can put them on her.  Then she walks very purposefully out the door.  And she hates being left behind, as we found out one morning when Tim packed up Delaney to take her to the store.  She was really upset, and she cried for at least a couple minutes after they left too.  But she had to stay because it was almost time for her nap. 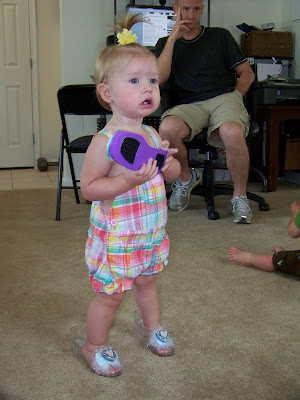 She has more of an interest in shoes than Delaney ever has.  She tries on everyone's shoes, including her daddy's.  But she's partial to the princess shoes, probably because of the cute embellishments.  She pulls them out of the bin and shoves them at me so I'll put them on her.  Then she walks around the room in them like it's no problem.  Tim said, "She walks better in heels than you!"

She's getting so nimble too.  At the house in Quantico, I used to try to hold her hand so she could walk out the back door down the big step.  It was awkward.  But one day I let her figure it out herself.  She held onto the door frame and made that big step without falling.  Smart girl!  She also knows how to go downstairs by herself, and now that we're at the new house that only has one short flight of carpeted stairs, we let her go up and down as much as she wants.  No more gates, woo-hoo!

She tries to talk, but rarely says a word in English.  She speaks fluent baby babble, with tone and inflection that sound so conversational.  I say, "That's really cute, but I don't understand a word."

She made a new sign, her first in a long time.  I was inspired by Kathy and Natalie's signing while we were all together in Pennsylvania, and so I re-attacked baby signing after a months-long hiatus.  She's not too interested in the eating signs, although she'll throw us a bone every now and then with "more" and "please."  I'd been trying to find a sign that really sparked her interest, and I finally found one: "pretty."  I'd been using the sign here and there for a couple weeks, pointing at her in the mirror and saying, "pretty". Then one day after I'd fixed her hair, she smiled and signed "pretty."  I was so pleased, I said and signed, "Yes, you are pretty!  You're a pretty girl!"  I'm teaching her to be vain, aren't I?

After that first sign, she started using some more:  "thank you," "juice," "milk" and "shoes."  But her favorite and most effective way to communicate is still with grunts, whimpers and pointing.  She knows Mama understands what she wants. 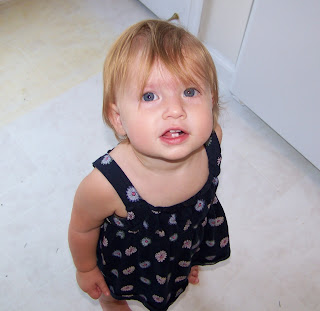 She's Daddy's buddy too.  If Tim says, "Who loves Annalise?"  she'll say, "Da-da!"  She plays on the floor with him and Delaney, and if he asks her for a kiss, more often than not, she'll give him one.  We were laughing about it the other night, about how once the youngest is weaned, they can kick me out if they want to.  I'll be obsolete.  My job of gestating and lactating will be finished.  Except none of them could do without me.  They love me too much.

Yes, this month she weaned.  I'm still a little sad, but it was clearly time.  She was only nursing once a day, in the morning; and then, around the time of the move, I seemed to be producing little or nothing.  Maybe it was stress.  Then one morning, Tim got her out of bed instead of me, so I didn't nurse her.  She didn't miss that session, and didn't ask for it, and I decided I wouldn't offer again.  I'm really happy to have nursed her for as long as I did.  It was a real gift to her and me both, and will always be a cherished memory.  She is growing up so fast!

The transition from old house to hotel to new house has been pretty much seamless for her.  We've just kept to our same routine no matter where we are.  She's been sleeping well, and has been as cheerful and mischievous as usual.  She is loving the open access to the stairs, which lead up to the FROG (finished room over garage), about two-thirds of which is the playroom.  I will have to post separately about our lovely new house, and tell you all about it, complete with pictures.  Maybe I'll do 'before and afters'.

Lately at bedtime, Delaney has been choosing their All the Ways I Love You book read by Grandma and Grandpa.  Annie giggles as soon as she sees me pick it up, and cracks up all the way through.  She is so funny and so cute I could eat her up!
Posted by Rachael at 6:58:00 AM