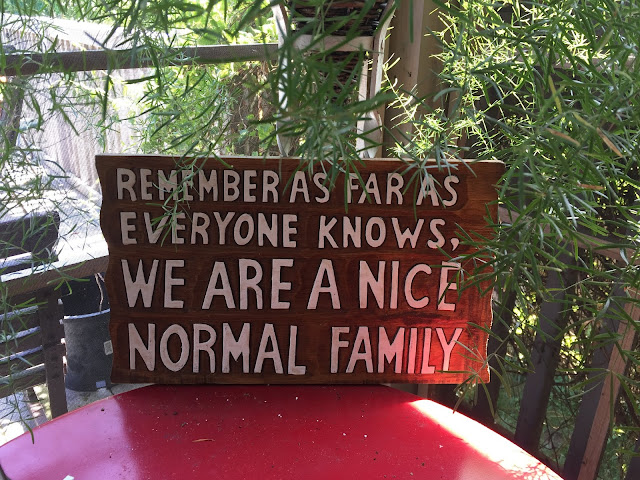 Joey and I flew up to Cincinnati for a week to go to my baby sister* Sophie's wedding. The trip went well despite my having made it as logistically difficult as possible for myself. The first time I flew by alone with Joey, I hand-carried the car seat through the airports, and I was like, nope, not doing that again. As soon as I got back from that trip I got one of these wheeled things to strap the car seat to. Then I could just pull it around like a piece of luggage. It worked like a dream on the trip back from Okinawa, although we didn't keep him in a car seat -- we kept him in an umbrella stroller. Still, for getting that car seat one place to the next, and having him secured on the plane, it was a lifesaver.

So I was convinced this was the best solution for this latest trip. What I hadn't counted on was having to disconnect the car seat from the cart and put them both on the conveyor belt to get through security. Then having to disconnect them yet again in order to get on and off the plane, carrying them up and down that narrow little aisle. You really need another adult to make that manageable. Do the math: I've got a two-year-old + gigantic Britax Frontier + the cart. And I've got two arms. I sat there at the gate in New Bern sweating as they called groups for boarding. I hoped maybe they'd call for anyone traveling with small kids who needed extra time, but they never did. I was in the second to last group called, and I had to make my way with Joey and all that gear out the door, across about 200 feet of tarmac, then up the stairs onto the plane. Another passenger offered to take my car seat ahead of me and to my seat. I didn't hesitate in my reply: "Thanks! We're 15D and 15F."

Throughout the whole process, New Bern to Charlotte to Cincinnati, and then reverse a week later, it was other passengers who saved my life every step of the way. It was humbling, it really was, to both need the help so much and to accept it with gratitude. I had someone help unbuckle the car seat when I couldn't; I had someone offer to carry one thing or another on or off the plane; I had someone to help herd Joey onto the plane in Charlotte on the way home. (Charlotte was a little crazy because when we went out the gate there were roped off walkways leading to several planes. I was carrying all the stuff, and Joey was trotting along behind me like he was on a Sunday stroll.) I literally could not have done it without each of the 10 or 15 kind strangers who always stepped in when I needed it. It made me think to myself that I really hope that the next time I'm flying with my hands not so full, that I'm looking around and noticing if others are struggling, and paying it forward.

If I had to do it over again, I'd take nothing but our little umbrella stroller and gate check it. I'd have Mom and Dad borrow a car seat from one of my siblings. Live and learn.

We stayed at Mom and Dad's house again, and it was really nice. It did call for a lot of flexibility on my part; I had to completely throw out any idea of bedtime or naptime for Joey.  He would crash when and where he needed to. With all the activity, and just having toys he wasn't used to, he was too excited to stay put when I put him to bed. That first night I brought him upstairs and tucked him in, only to have him appear a few minutes later. There's no door. This happened about 10 more times. At one point he simply followed me back down the stairs. Finally I threw my hands up and said, "Alright, Joe, go sit with Papa." He was like, "Yay!" Tim was like oh boy when I'd tell him he was staying up until I went to bed, about 11 or so. But if I get a choice between enforcing bedtime for a week or relaxing and enjoying the limited time I have to spend there, I do what I have to do! Just crack open a beer and go with it. Life is short.
My sister Anna now lives right around the corner from Mom and Dad, so we got to see her and her family quite a bit. Joey idolized his cousins Miles and John Paul. Mom and I stayed at the house while Anna and Grace went out to pick flowers for Sophie's wedding. I couldn't wait to see what they would come up with. They did not disappoint. 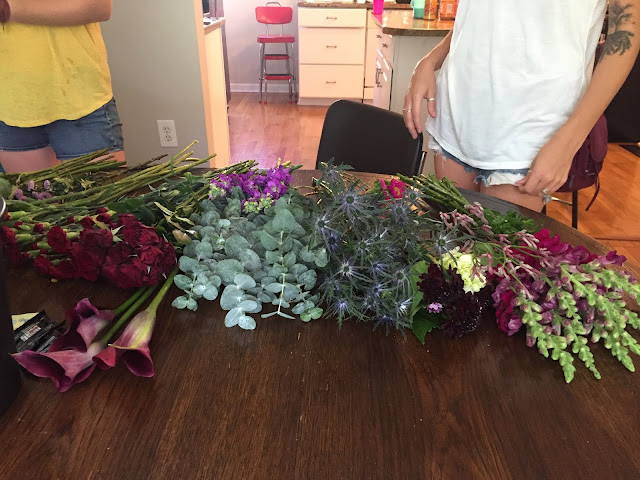 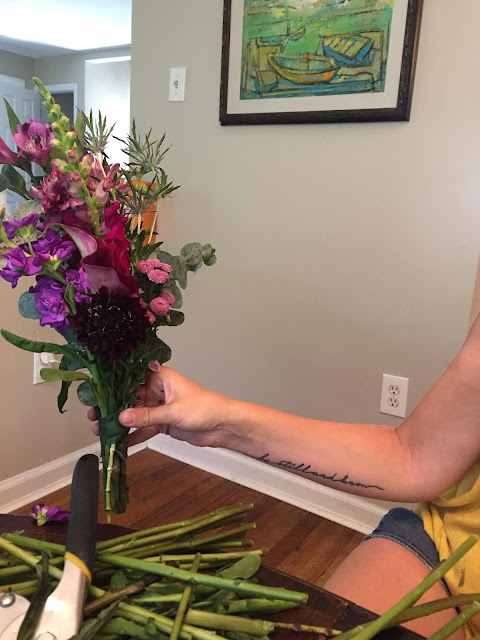 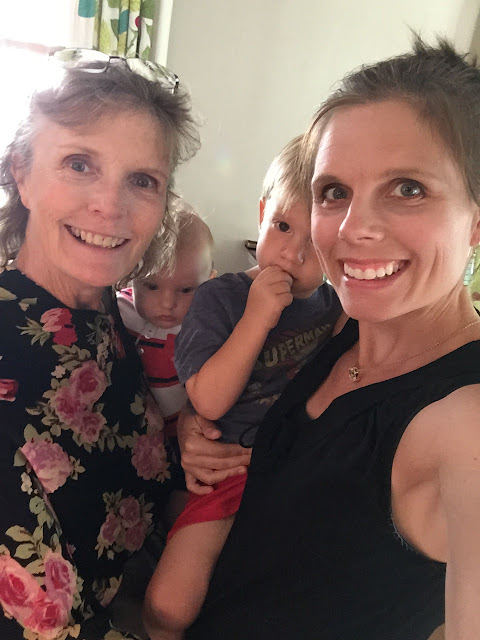 Sophie's wedding took place in a pavilion at a nearby park. Anna and Grace had gone there the night before and worked their magic, hanging lights, garlands and gauzy curtains to set the mood. Sophie was gorgeous in her lacy black gown. She and Mike had a handfasting ceremony, which is a Celtic tradition.** 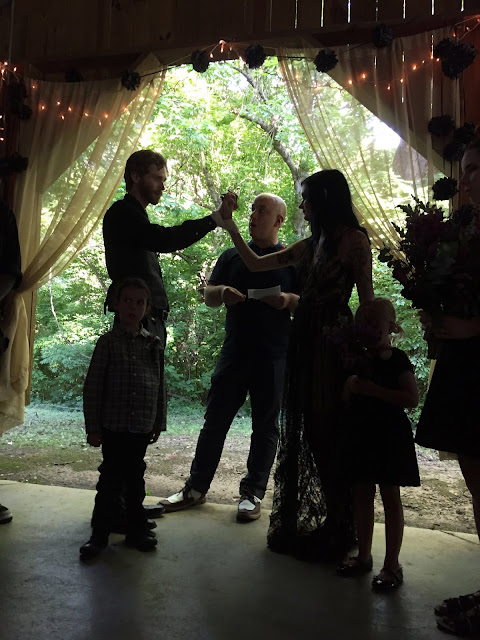 Their friends' band performed a hauntingly beautiful rendition of Lovesong by The Cure, for their first dance. I loved it. 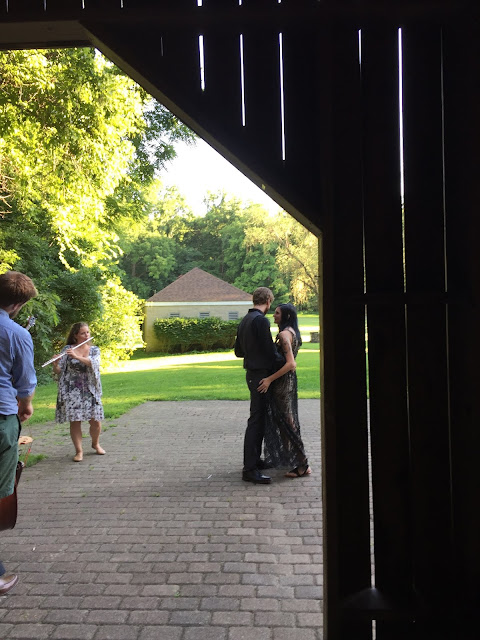 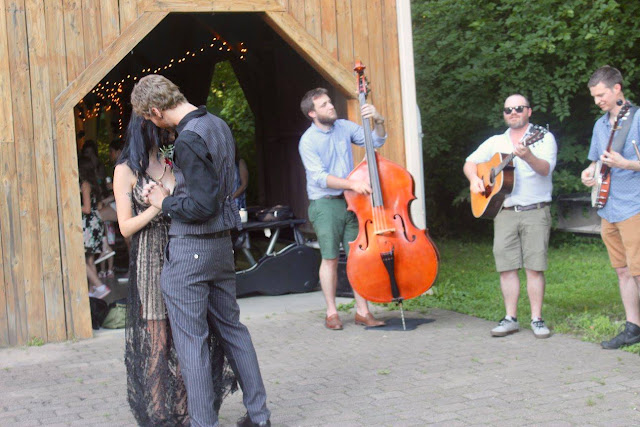 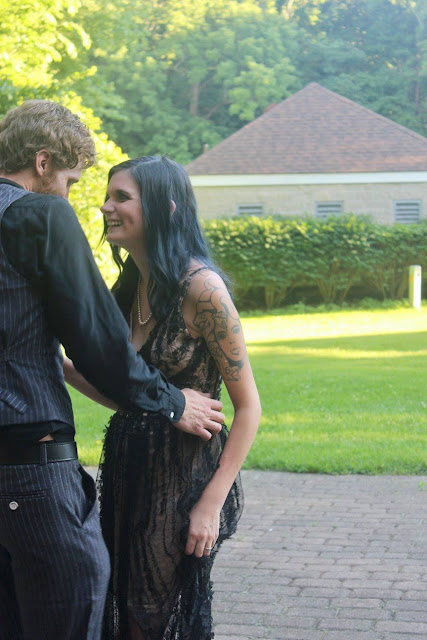 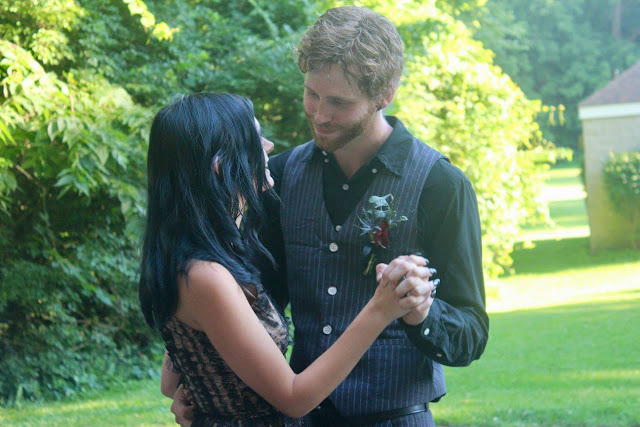 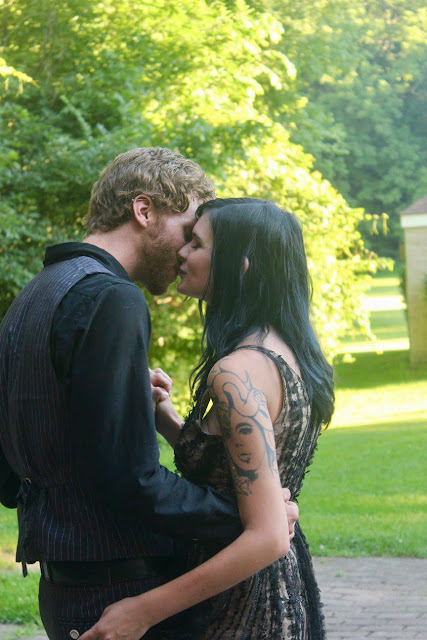 '90s babies that they are, the bride and groom chose for the occasion a playlist that was entirely '80s New Wave. It got a thumbs up from me. 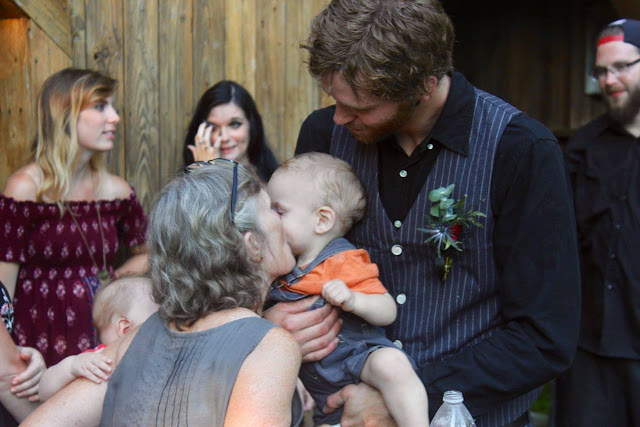 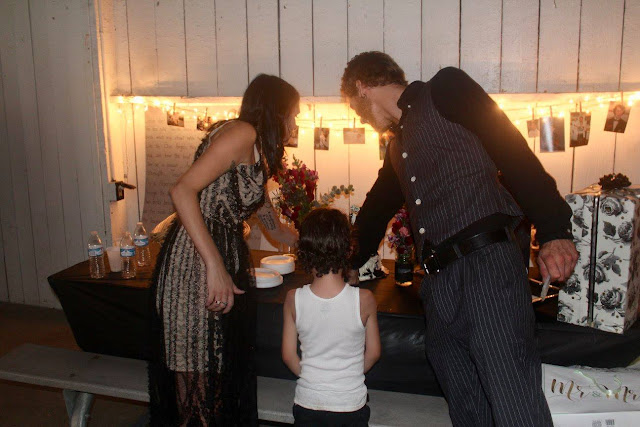 After that night, everyone was like phew -- on with the rest of summer. 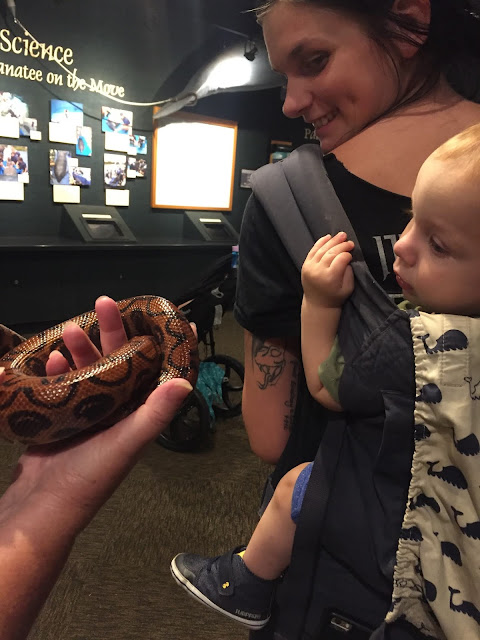 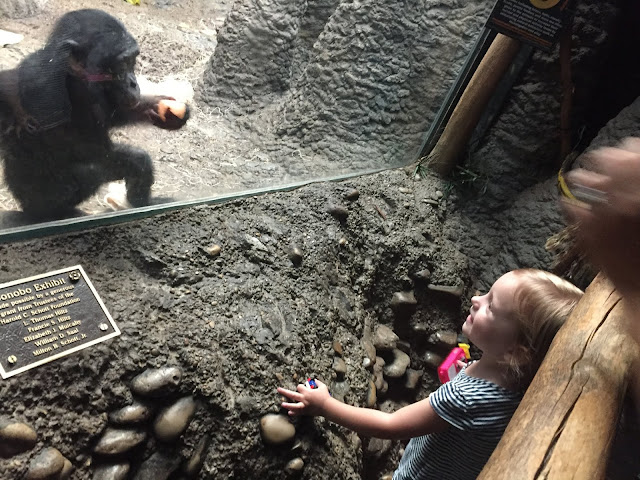 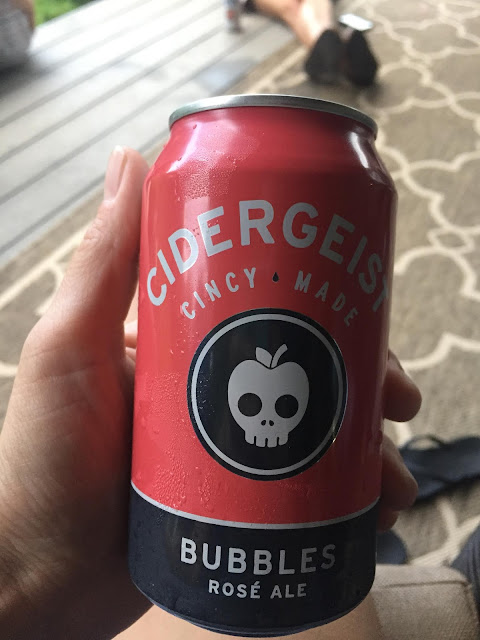 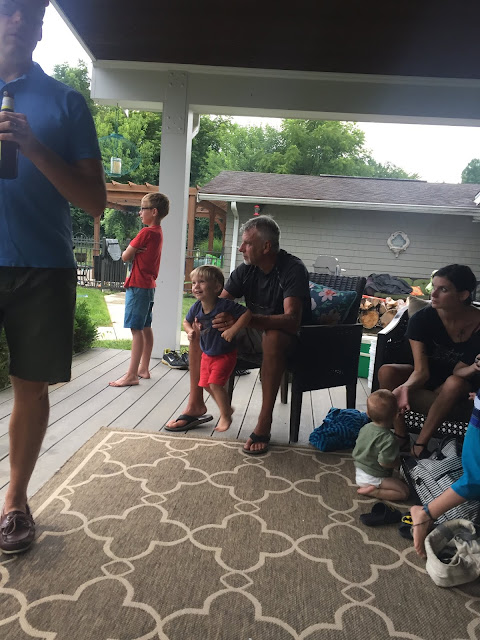 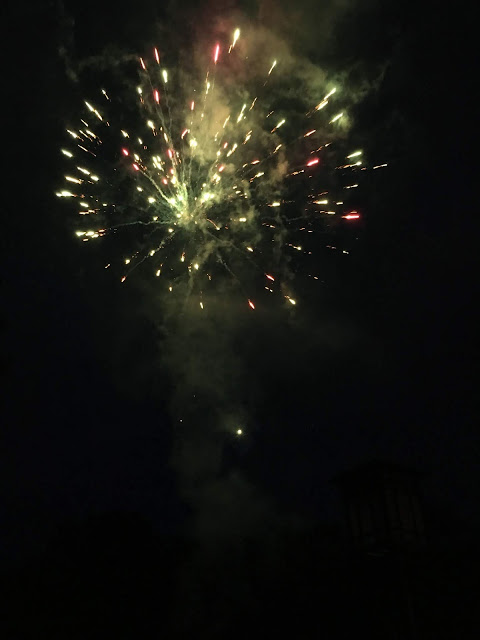 Oh, and I almost forgot -- while we were in town, Delaney picked out a puppy from a litter of Frenchton puppies born in Falmouth, KY. Long story, but this breeder was the same one that Mom and Dad got Georgie from. So this litter is actually nephews and nieces of Georgie's. If we were ever going to get a dog -- and we were, because DELANEY -- I wanted it to be a Frenchton like Georgie. So Mom got in contact with the breeder this past spring, and she happily agreed to let us pick one from the next litter that Georgie's sister was going to be having in June. Four pups were born on my birthday, June 25, and Delaney picked the only girl. Mom and Dad will pick her up on August 25, and then on September 8 we will meet up in Asheville, NC to get her from them. Delaney named her Willow. Is she not the cutest little thing? 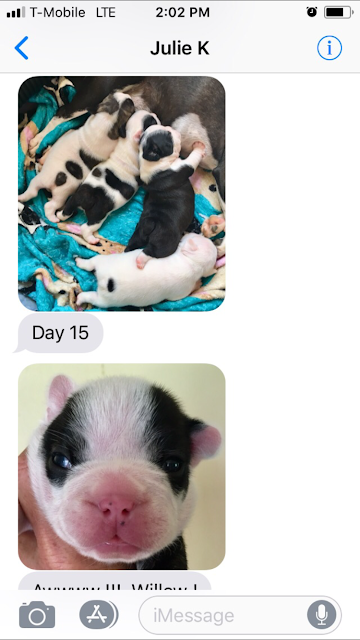 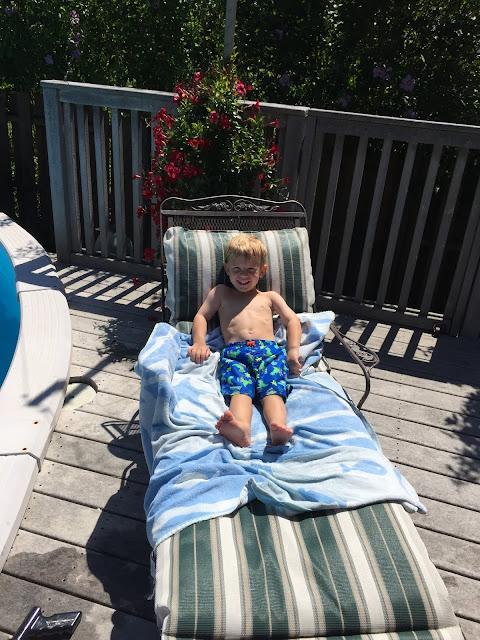 I'm glad to be back home, but I sure do miss them all. I'm grateful for every visit we have, and as always for the chance to see a sibling tie the knot. It looks like Sophie found the guy who knows her through and through and loves her, quirks and all. Speaking from 11+ years of experience, I can tell you what a wonderful thing that is. Nobody else could put up with Tim the way I do.😉 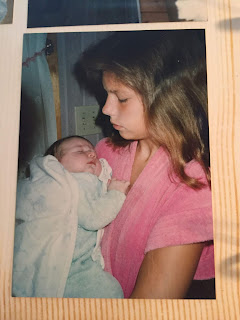 ** Sophie later told me how, since she and Mike were having their rings tattooed on, she had thought of having the tattoo artist at the ceremony. Instead, they opted on the handfasting in place of the exchange of rings. Good choice! The handfasting was a lot more romantic to watch than the tattooing of rings🤣.