When I came across this tutorial on Pinterest, I knew I had to try it, and I knew what jeans I had to try it on. Here were my rugged three-year-old flare leg jeans I got from a Levi's outlet near Quantico.  Three years of being at kid level changing diapers, putting on shoes and zipping jackets in these jeans had taken their toll.  I had a huge hole in the knee and while I know it's stylish, the hole kept growing.  Soon it was going to cross the line between cute and skanky, but until a day or two ago, I had no idea what I was going to do.  You know how hard it is to find a pair of jeans that comes this close to fitting perfectly?  They may have only cost $25 but I'd spent hours trying on other pairs in order to find these.  And by the way, there are no Levi's outlets anywhere around here.  I am not devoted to wearing Levi's in particular, but I had to appreciate one store dedicated entirely to jeans in all sizes and in all styles. 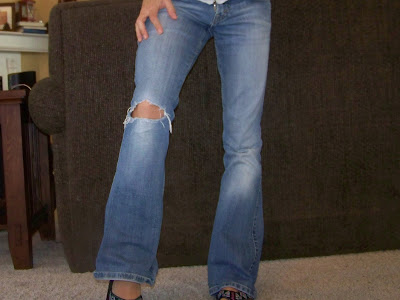 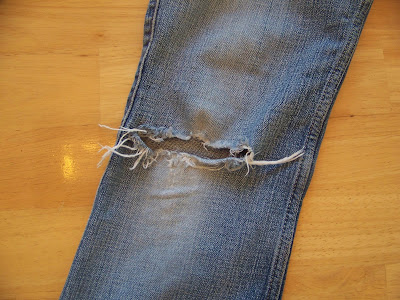 The ladies at the fabric store helped me find everything I needed.  I found fabric with a cute print from a scrap box, an ugly denim iron-on patch to reinforce it, some Steam 'n Seam, and navy blue embroidery floss that matched the print on the fabric.  Red would have also gone with it, but I preferred something more subdued. 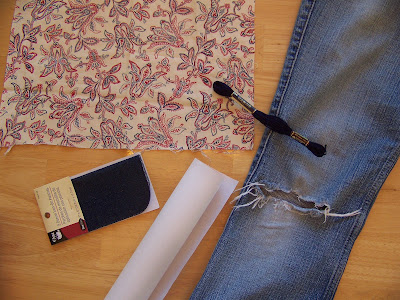 The older lady at the fabric store who I think owns it (she acts like the boss) wanted me to use the denim patch inside the jean, and then bond the pretty fabric over everything on the outside.  While that was one way that would have worked, it was not the way I had in mind.  For some reason she didn't understand what it was I really wanted -- or she understood and just thought it was dumb.  I opted to buy the denim one she suggested anyway, and use it to reinforce the pretty fabric kind of like the writer of the tutorial did.

The first step was bonding the denim patch to the back of the fabric.  That was easy.  After that it got a little tricky.  I have never patched a piece of clothing in my life.  A broken pair of jeans used to just mean a new pair of jeans.  So I had to really think it through step by step. 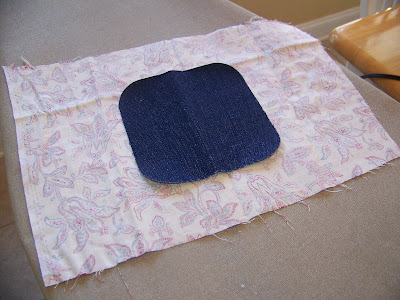 Next, I realized that I had no idea how to use the Steam 'n Seam.  The fabric store sells it by the quarter-yard, so that was what I got.  It came with no directions.  I turned to Google first and learned that there were two versions of this product and I didn't know which one I had.  I called Karen at the fabric store and she told me what it was and how to use it.  I was back in business.  I decided I'd better cut a rectangle a little bigger than the hole in my jeans so that the patch wouldn't show through.

I laid the sheet of Steam 'n Seam over the fabric and pressed it with the iron. 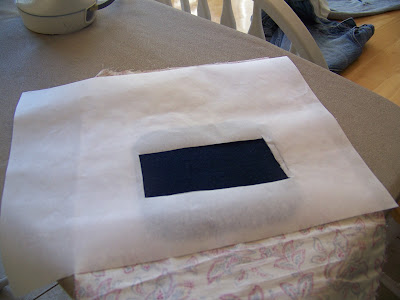 Then I peeled off the paper and prepared to attach the whole thing to the inside of my jeans.  But uh-oh -- I realized a couple things were wrong. 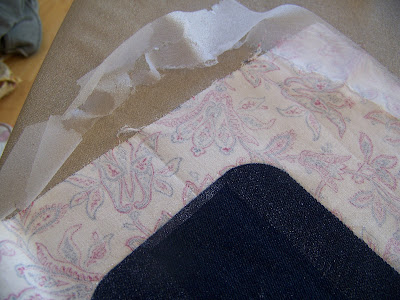 Yes, I failed to protect my ironing board cover -- didn't even think of it.  But that's not what I'm talking about.  Do you see which side I attached the bonding web to?  Not the pretty side that I want showing through the hole in my jeans, but rather the ugly side.  Not only that, but I have a ton of excess fabric around there.  That patch would practically wrap around my thigh by the time I was done!  I hadn't even thought about how the whole entire thing would be bonded to whatever I ironed it onto, and once it's on there, it's on there.  No going back.  I felt like such a dummy.  I'm so glad I realized all this before I started ironing it.  I put everything away and tried again later with some new Steam 'n Seam.

I trimmed it all down to the size a patch should actually be.  This time I did not cut out a rectangle because after trying and failing at this the first time, I discovered that the bonding web would not be visible anyway.  I forgot that the bonding web was still on the other side of the fabric, and guess what I did?  Yup, I fused the patch to the ironing board cover.  I thought all was lost, but luckily it peeled off. 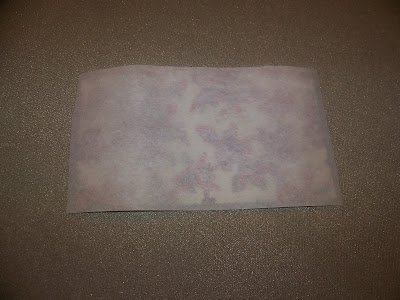 I'm also glad I thought of using the paper backing to sit inside my jeans and prevent the leg from being fused together. 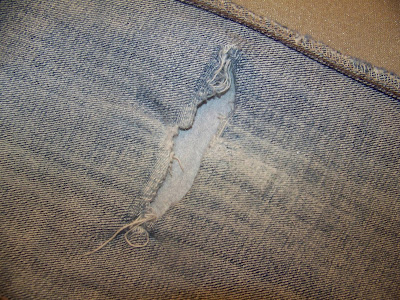 I had no idea it would be this complicated.  At last, the moment of truth.  I nervously ironed the patch on, gave it some time to cool, and tested it.  It worked! 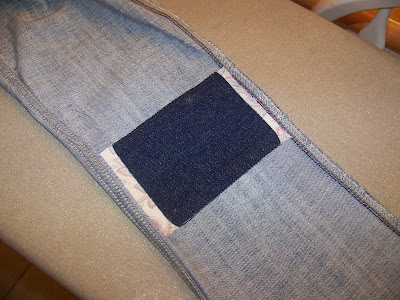 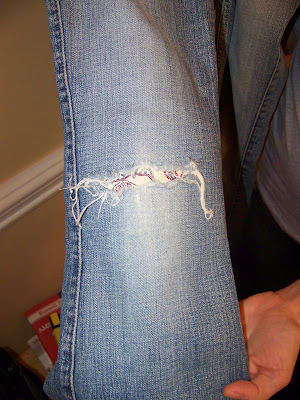 I think maybe I should have just stopped here because it already looked perfect, but I went ahead and sewed stars on like the tutorial writer said to do.  She had noted that not only do they look cute but they also serve to hold the patch more firmly in place.  That may be true, but I'm still on the fence as to whether I like it with the stars or without.  They look like they were made with pen. 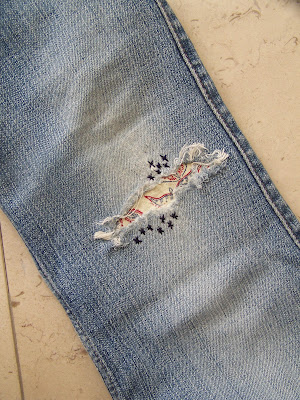 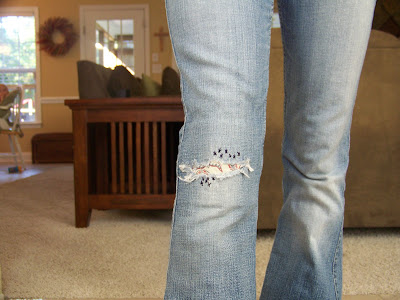 Much better.  These jeans have a new lease on life.  Our ironing board cover will need to be replaced immediately.  Live and learn.  I want to patch something else now.  Anyone need a patch?

Email ThisBlogThis!Share to TwitterShare to FacebookShare to Pinterest
Labels: me, projects

The Six of Us